Last Sunday it was incredibly rainy. There weren’t many possibilities to do something outside.
So, we decided to do a little work on the Skyline in the garage. After we had already changed a few visual things, such as the debadging of the boot lid, we now wanted to look at a technical component. So we spontaneously removed the current air box and replaced it with an Apexi Power Intake, which was already in stock.

Before the new part could go in, the old one had to go. To do this, we took out the filter that was recently installed when we picked up the car (we just didn’t trust the original filter for an 8-10h drive).

After that we had a few difficulties correctly detaching the intake pipe from the open air box.
We first thought the air box could be removed through the screws, but this turned out to be wrong.
It was correct to first remove the hose and then loosen the screws after the whole assembly had been removed from the engine bay.

For everyone who is planning to do the same mod: First, carefully pull out the MAF sensor cable. Don’t break the clip like we did 😀 After that, only the screws on the body have to be loosened. In addition, loosen the clamp on the intake pipe and you can simply pull it off. Some force may be required. The golden screws can now be removed. Now you can access them from all sides with the whole air box out of the car.

After the air flow meter had been cleaned nicely, the new intake could be installed. A new paper seal was included in the kit. We could also reuse the old sealing ring of the MAF housing.

Installation was relatively quick. The conical filter was mointed to the MAF housing and this in turn was plugged into the suction hose. When the clamp was tightened again, we attached a spacer to the stand to prevent it from wobbling around and hitting the surrounding parts later while driving.

Unfortunately, a test drive was not yet possible because the Skyline will not be registered until next year. But already at about 2000 revs, you could hear a clear intake noise and when you let go of the throttle, the desired hissing and whistling of the turbo could be heared : )
We posted a short video of it in the Instagram highlight “Engine Bay”. If you’re curious, stop by there!

All in all, the conversion went relatively well – despite the instructions in Japanese – if you don’t try to unscrew the wrong screws, that is. So far we are also satisfied and especially excited about the first real test drive with more revs! Of course, it also looks good in the engine bay and maybe later in the project. It will play its role in terms of adding performance ; ) 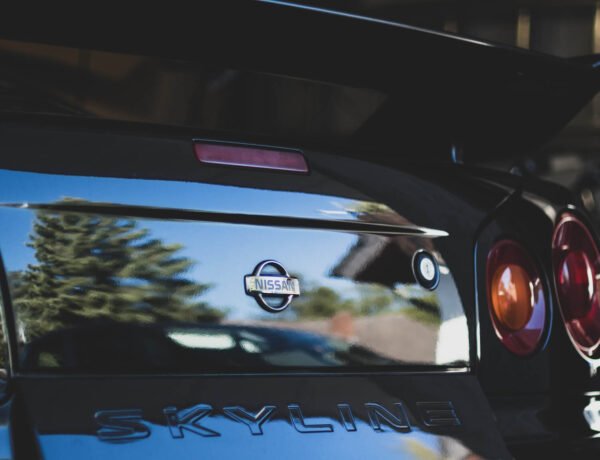